A photo of a colorful Polish village is conquering the internet. That s how it came about

I decided to check what the real story of this unique, popular photo is.

A photo of the Polish village of Sułoszowa was published in August 2019 on the instagram worldurbanplanning profile , from which several other profiles later drew them . Recently it has also hit websites such as Reddit or Wykop , thanks to which it has gained immense popularity all over the world.

A popular photo raises a bit of emotion - not just because it's good.

Nobody really knew how this photo was created and who the author was. Searching the Internet in many different ways did not help. The original source of the photo is the aforementioned profile. However, it is not clearly stated there who the author is, which raises some suspicion. Some media say it was made by a drone. On one of the groups for drone enthusiasts I found a comment by drone operator Wojciech Radwański, about which I wrote recently:

I found the place on Google Maps a few years ago. Fascinated by the amazing arrangement of fields and buildings along provincial road 773 I went to the place with my drone. Unfortunately, before leaving I did not look at the scale and it turned out that the section I'm interested in is over 4 km long and 2 km wide. Photographing the village with one photo proved impossible. The manufacturer limits the height at which the drone can rise to 500 m. Additionally, there is a Krakow airport nearby. I photographed the nearby fields from a height of 100-200 m and returned home. I decided to return to this place and use the technique used to create the orthophotomap. I programmed the drone to fly along the set route and from several hundred acquired photos I wanted to submit one proper. Unfortunately, after six flights and after using all the batteries, I could not photograph even half of the area. I gave up the topic. Since the last attempt, the development of technology has extended the flight time of my drones by 10 minutes. It's a lot. Photographing the village with the fields should therefore be easier - Wojciech Radwański.

As Wojtek emphasized, capturing the whole area in one photo with a drone is unlikely. A plane or helicopter will be better for this. This is a good lead, but the answer to the question of how this photo was created is yet another. To find out the truth about the history of the photo, I wrote directly to the author of the profile on which it was published. After a few days I got the answer.

This is a satellite image that we have processed in color. The picture is 100 percent true, it has only been saturated to a certain degree in color - worldurbanplanning.

On the worldurbanplanning profile you can find many other photos of this type, where you can see the amazing urban layouts captured from a bird's eye view. How did the creator come across this particular landscape?

I found it by accident, really. I was looking at the map of Poland and just came across this landscape, which captivated me with its interesting morphology and composition - worldurbanplanning.

Sułoszowa has one of the longest streets in Poland

The village of Sułoszowa is located near Olkusz in the Lesser Poland Voivodeship, only 29 km northwest of Krakow. A tourist trail runs through the village, the Trail of the Eagles' Nests and the European cultural and pilgrimage route "Via Regia", which is one of the roads of St. James leading to the Sanctuary of Santiago de Compostela. In the administrative area of ​​the village there are Pieskowa Skała Castle and Hercules Maczuga.

As can be clearly seen from above, the houses of the village of Sułoszowa are located along the main road, without additional streets diverging perpendicularly from it. Sułoszowa stretches for 9 km without a break. As a commune it is inhabited by about 6000 people. This arrangement of the village arouses great interest and even surprise in many parts of the world. 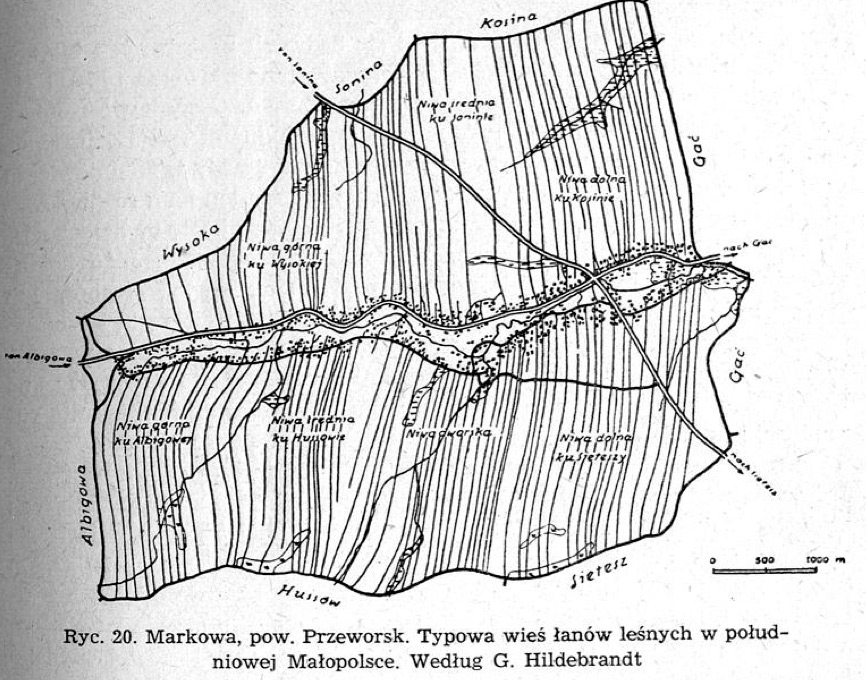 Chain chains were founded in highlands and mountain valleys along streams. Everyone received a separate piece of land (Ian) only for themselves, the fields were separated from each other by dirt roads.

The current situation associated with the coronavirus pandemic means that we are rediscovering our own courtyards and surroundings. On an all-inclusive holiday in Egypt or Portugal, we probably have nothing to count on, so we will probably spend this summer traveling around Poland. It's a great time to discover places like Sułoszowa, which are not only beautiful, but also have a rich history.

A photo of the colorful Polish countryside conquers the internet. That's how it came about
author xiaomist