A massive, rotating spiral galaxy in the early universe. She wasn t supposed to be there

Spiral galaxies similar to our galaxy, the Milky Way, were formed gradually, over time gaining their massive mass. At least, astronomers thought so far. However, the latest discovery undermines this theory.

Using the ALMA Observatory for their work, astronomers saw the massive rotating disk of the galaxy, which we now see as it was when the universe was less than 1.5 billion years old. Observation results have just been published in the journal Nature.

This is Wolfe's Disk from over 12 billion years ago

The DLA0817g galaxy, named Wolfe's Disk, in honor of the late astronomer Arthur M. Wolfe, is the most distant rotating disk galaxy ever observed. The unmatched precision of ALMA instruments has determined that the galaxy rotates at 272 km / s, which is close to the rotation speed of the Milky Way.

It was previously suspected that such rotating discs full of gas could exist in the early universe. Only now, however, thanks to ALMA, have we obtained clear evidence that such galaxies already existed 1.5 billion years after the Big Bang. - says Marcel Neeleman from the Max Planck Institute in Heidelberg.

The discovery of Wolfe's Disk undermines many theories trying to explain galaxy formation processes. They say that the massive galaxies at this stage of the history of the universe increased their mass, merging with successive smaller galaxies and hot gas clouds.

Most of the galaxies discovered in the young universe look like one big chaos because they still bear the marks of violent processes connecting with other galaxies. Such processes effectively hinder the formation of orderly, cool, rotating discs that we can observe in the current universe.

Most galaxy scenarios allow for orderly disks to be formed only 6 billion years after the Big Bang. The discovery of such a galaxy in such an early universe indicates that we have not yet come to know all the processes that shaped spiral galaxies.

We suspect that Wolfe's disk was created gradually attracting more and more cool gas from the environment - says J. Xavier Prochaska from the University of California at Santa Cruz. Despite this, we still do not know how to collect so much gas in one place while maintaining a relatively stable, rotating disk. 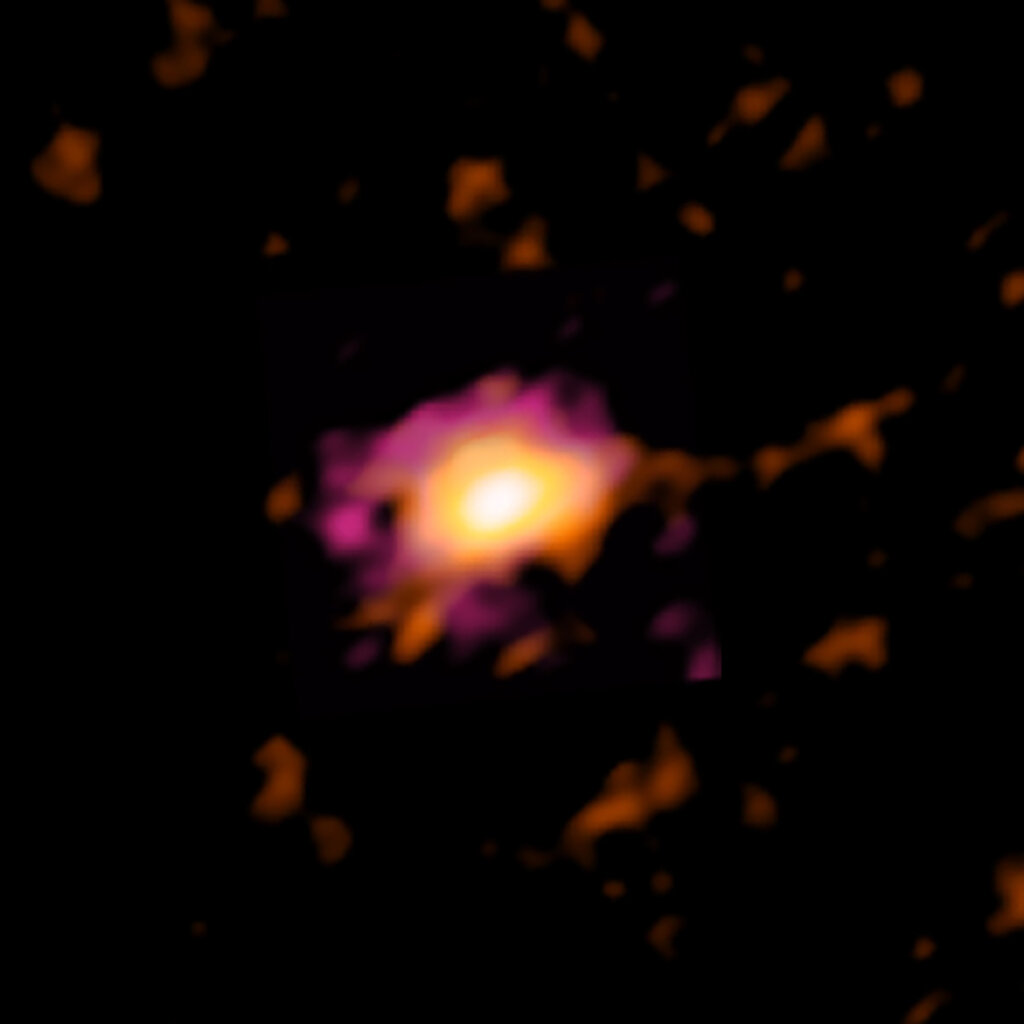 Researchers decided to study this amazing object in many different ranges of radiation to get as much information as possible about it. Using the ALMA Observatory, galaxy movement was observed in the radio range and the mass of atomic gas and dust was measured. The Very Large Array Observatory measured the mass of molecular hydrogen - fuel for star forming processes. The Hubble Space Telescope, on the other hand, observed massive stars in the ultraviolet range.

"The rate at which new stars form in Wolfe's Disk is at least ten times higher than our own galaxy," says Prochaska. This must be one of the most fertile disk galaxies in the early universe. 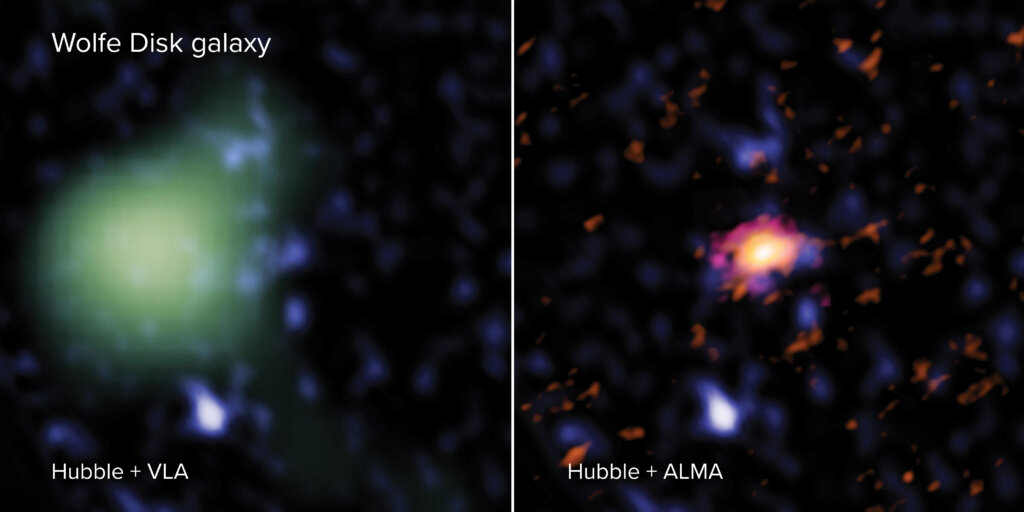 Scientists first discovered Wolfe's disk in 2017 in data collected using the ALMA radio telescope. Neeleman and his team discovered the galaxy when analyzing radiation emitted by an even more distant quasar. Quasar radiation was partially absorbed as it passed through a massive cloud of hydrogen surrounding the galaxy. This is how astronomers saw her. Instead of looking for radiation emitted directly by extremely bright but rarer galaxies, astronomers used the method of searching for radiation absorption effects to find darker, more normal galaxies in the early universe.

The mere fact that we were able to find the Wolfe Disk using this method means that it belongs to the normal population of galaxies present at that time. When we noticed that the galaxy is rotating during our latest observations with the ALMA radio telescope, we realized that early rotating disk galaxies are not as rare as we thought, and so there may be many more there - concludes Neeleman.

A massive, rotating spiral galaxy in the early universe. She wasn't supposed to be there
author xiaomist