The Xiaomi Mi 11 arrives in Spain and does so with a gift: price and date of sale

As planned, Xiaomi has just presented its new Xiaomi Mi 11 in Spain . A new generation of the most emblematic and advanced smartphone of the firm that will finally begin to be sold in Spain at the end of this month of February.

Specifically, the Xiaomi Mi 11 will begin to be marketed on Mi.com and Amazon from next February 22 . In addition, it will also be available in the Mi Store, Carrefour, El Corte Inglés, MediaMarkt, Movistar, PCComponentes, Phone House and Worten from February 25 in its higher capacity variant. 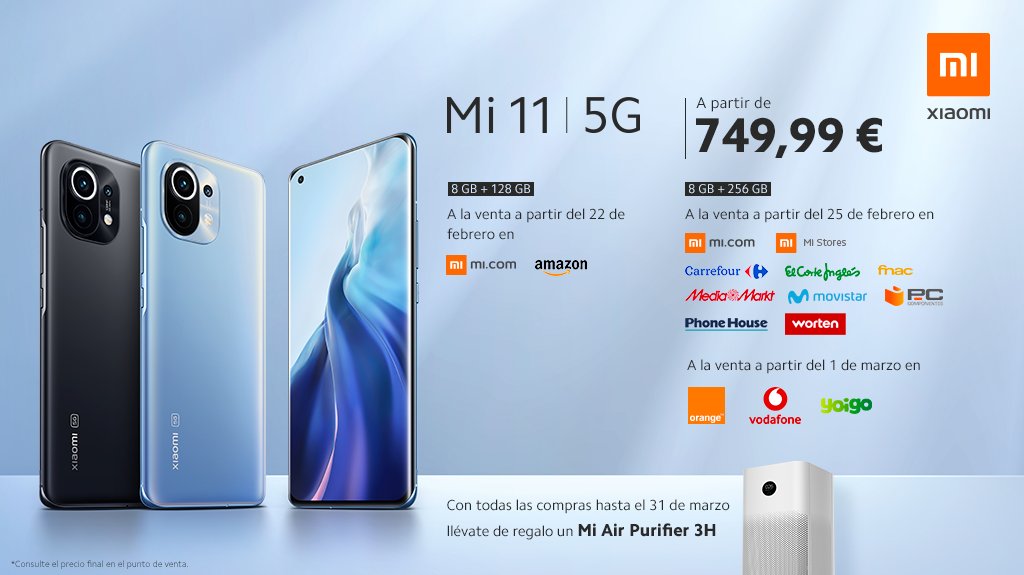 Price and date of sale of the Xiaomi Mi 11.

In addition, as a surprise, all those who acquire the Xiaomi Mi 11 before March 31 in the authorized Xiaomi channels, will receive as a gift a Xiaomi Mi Air Purifier 3H , a most complete air purifier valued at about 150 euros.

And of course, the Xiaomi Mi 11 will be launched for sale in Spain with a charger included , this being a 55W GaN technology charger that will also serve as a charger for laptops, game consoles and small gadgets.

The entry The Xiaomi Mi 11 arrives in Spain and does so with a gift: price and date of sale was published first in xiaomist: Xiaomi news and news website .