MediaTek s Snapdragon 888 alternative to debut on a Xiaomi

At the end of the month, specifically on January 20, MediaTek will announce its new high-end processor. We are talking about the MediaTek Dimensity 1200 , a powerful high-performance chipset that promises to become the alternative to the Snapdragon 888 and that we will also see in at least one Xiaomi terminal.

This has been dropped by Lu Weibing, president of Xiaomi and CEO of Redmi, mentioning the MediaTek presentation event and thereby making it understood that at least one of the models of the next Redmi K40 will have the MediaTek Dimensity 1200.

Although, we still do not know in detail this new MediaTek processor, rumors claim that the MediaTek Dimensity 1200 will be at least better than the Snapdragon 865 , thus managing to offer great performance at a low cost. 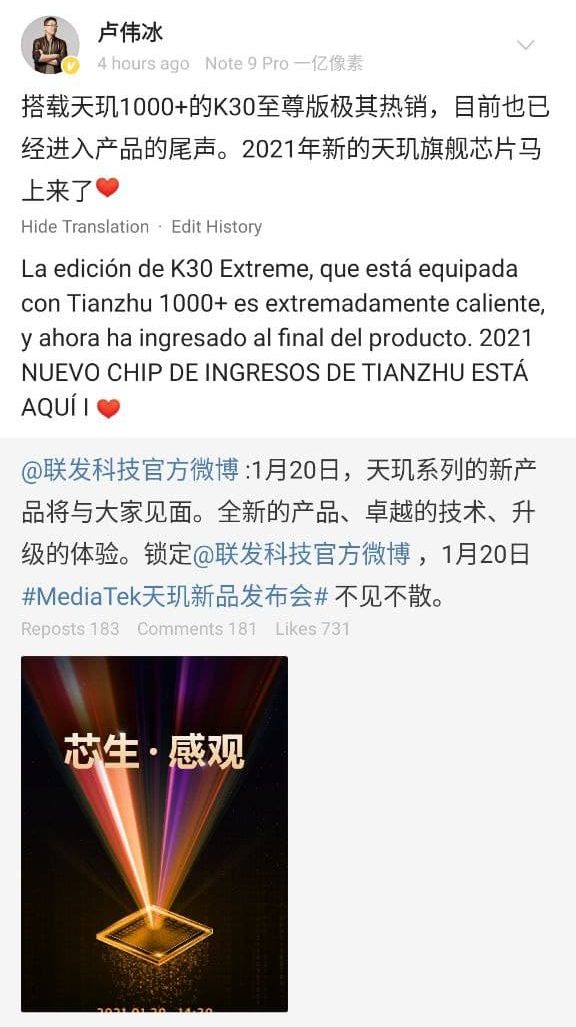 Let's not forget that this would not be the first time that Xiaomi makes use of one of the most powerful processors from MediaTek. The Redmi K30 Ultra managed to break sales records in China thanks to its attractive price and high performance offered by the MediaTek Dimensity 1000+ .

In short, the union between Xiaomi and MediaTek seems to continue forward. Without going any further, just a few days ago we met the Redmi Note 9T , a mid-range smartphone equipped with the MediaTek Dimensity 800U and apparently, it will not be the only smartphone that we will see this year equipping these processors.

The entry The alternative to the Snapdragon 888 from MediaTek will debut in a Xiaomi was first published in xiaomist: Xiaomi news and news website .