The staff of Mi Community Spain resigns: Xiaomi seems to have changed its treatment with the Mi Fans

Not everything is new smartphones or announcements of the great growth that Xiaomi has experienced in the last year. Beyond this, there is a large community of disappointed My Fans that we want to echo.

And it is that, late yesterday, the Staff of Mi Community Spain presented their resignation letter as a result of Xiaomi's change of attitude. According to these, after a long debate and suffering, they had no other option but to present their resignation en bloc.

As we can read in said resignation letter, Xiaomi has taken a great turn in its attitude towards its followers , focusing its official community, that is, My Community, in a place of marketing overexploitation and not a place focused on Mi Fans.

Without going any further, those who until yesterday were part of the Staff of My Community, above all My Fans who have never sought a material or economic benefit, complain of their disappointment after feeling " simple numbers " and a minor part of what Today is Xiaomi.

We leave with our heads held high, having struggled to try to change things for the better and not give up until the last moment, but it has not been possible.

Beyond this, this goodbye by the Staff of Mi Community Spain is joined by the censorship that some of their threads have suffered . Interviews with great sentimental value, which have apparently been removed from the official Xiaomi community.

Without further ado, the Mi Community Staff says goodbye with their heads held high, having stood up when the brand has madly refused and proud to have offered support and truthful information , listening to any questions or problems from other My Fans. 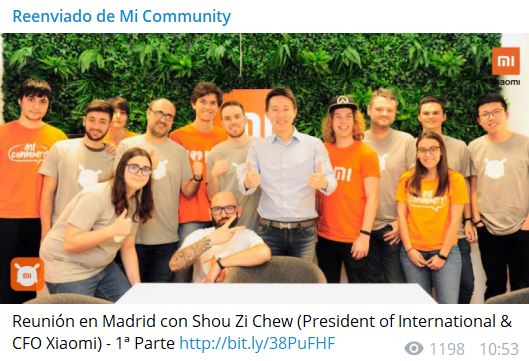 One of the threads deleted in Mi Community Spain.

In short, a long and goodbye that seems to come after the greatest success reaped by Xiaomi becoming the best-selling mobile phone brand in Spain. A goodbye that results after a change in its marketing strategy, leaving aside those who have always followed it ... the My Fans .

IMPORTANT : From XIAOMIADICTOS we want to make it clear that we have no relationship with Mi Community. We are only dedicated to reporting, to the best of our knowledge, all the news and updates that revolve around Xiaomi, Redmi and its set of sub-brands.

The entry The staff of Mi Community Spain resigns: Xiaomi seems to have changed its treatment with the Mi Fans was first published in XIAOMIADICTOS: Xiaomi and Redmi news and news website in general .