Stabilization so good that you do not need a gimbal. GoPro Hero 7 Black - 7 of the best features

The biggest novelty of the GoPro Hero 7 Black sports camera is the HyperSmooth stabilization. Can it really match gimbal? I checked it and it turns out that it does.

Sports cameras have an increasingly difficult task to convince audiences. In the era of sensational cameras in smartphones and the universal waterproofness of casings, the average user has fewer and fewer reasons to buy a sports webcam. 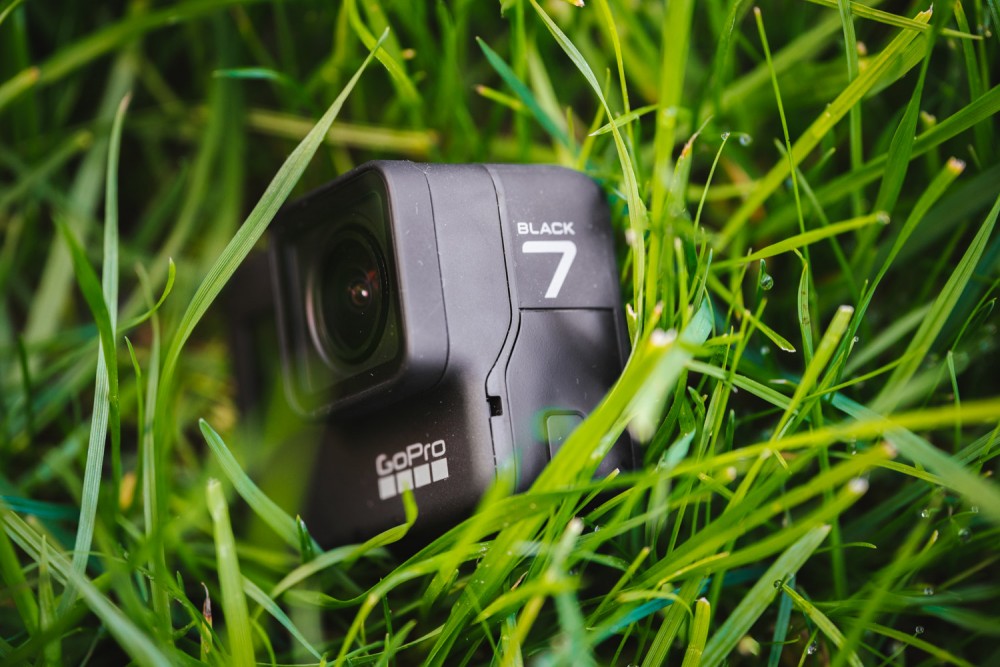 Over the past six generations, GoPro has focused on improving image quality and making increasingly advanced recording modes available. GoPro Hero 7, however, puts something different, namely image stabilization. HyperSmooth mode is supposedly the most advanced electronic stabilization we can find on the market.

Reading these assurances shortly after the premiere, I was almost certain that it was just marketing boasting. It turns out, however, that GoPro has done something really amazing.

First of all: stabilizing HyperSmooth is a great revolution. Something like that has not happened yet.

The image stabilization of HyperSmooth is so good that it literally changes the rules of the game. After the recordings I had the impression that this time the shakes must be visible on the film, after which it turned out that the camera did well. In the video below you will find a comparison of electronic stabilization and gimbal.

Differences between stabilization built into GoPro and gimbal are hard to find. Recording without any stabilization shows how great HyperSmooth does. The possibility of getting such smooth motion without additional equipment means a huge miniaturization of the recording set.

What's more, HyperSmooth works even in the highest recording mode, i.e. in 4K at 60 fps. HyperSmooth mode lightly crops the image, in which we lose about 10 percent. the frame's surface. This is a small cost in exchange for a great function, the more so because we have a very wide viewing angle.

Second: Timewarp is a great addition

Also new is the Timewarp recording mode, which is basically a hyperlapse that benefits from the HyperSmooth stabilization. Just see how Timewarp works in practice.

All shots on the film were recorded from the hand, without any additional accessories. It looks really impressive, and is created entirely in the camera. Of course, the camera does not run out of the standard timelapse mode.

Thirdly: a refreshed, much better interface

Support for GoPro Hero 7 is very easy. On the casing you will find two buttons to operate and two displays: one at the front, showing the modes of work and the other one, touch, to operate the interface and view the frame. 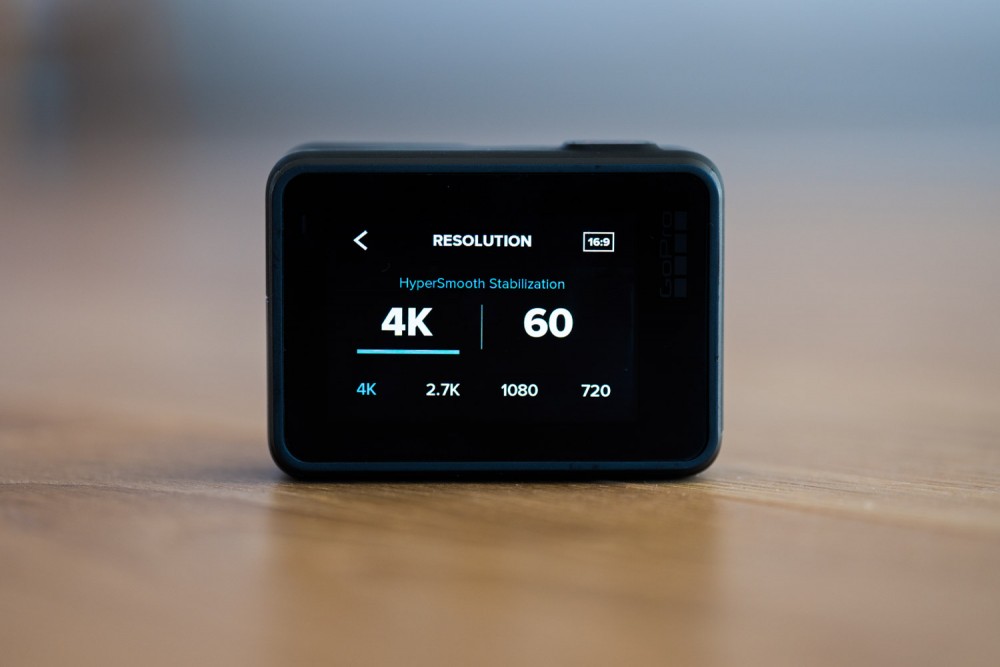 The interface has changed very much, which has been significantly slimmed down, although the function has arrived. The camera offers real modes and settings, and the designers have managed to maintain a very clear layout, in which there are no lists or complicated menu and sub-menu layouts. Well done!

In addition, the GoPro Hero 7 can be operated by voice, but it is rather an add-on that you can show off in front of your friends and then forget. Commands issued in English do not always work as they should, so you can not always rely on them. 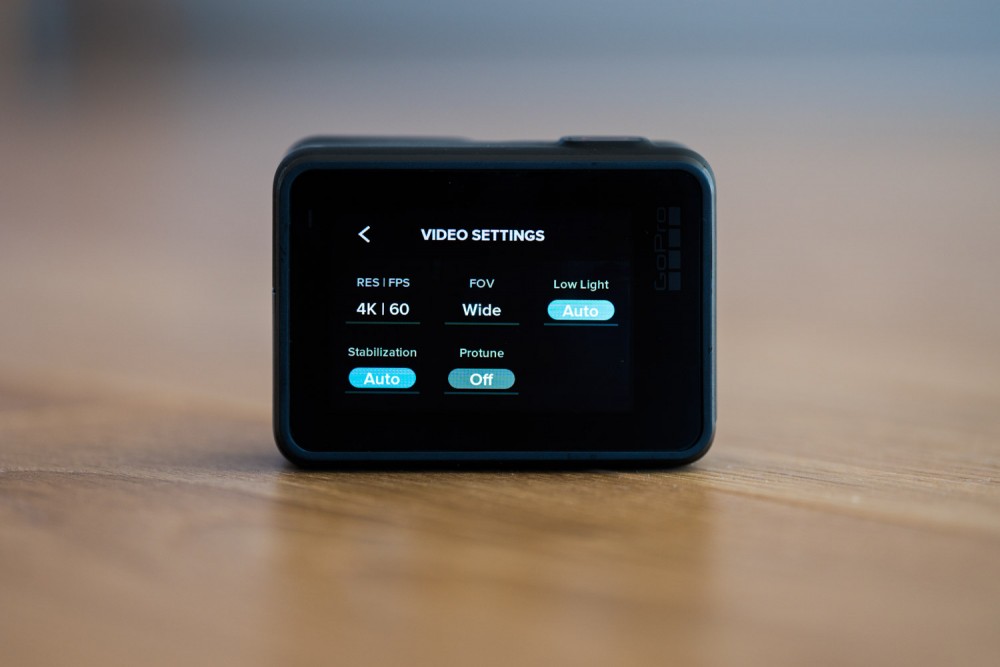 This point is not new to the Hero 7 camera, but it's worth noting. The latest version of GoPro is based on the design used for the first time in Hero 5. We have a compact, rubber casing that is resistant to shocks and water to a depth of 10 meters without any additional covers. This is a huge convenience.

By the way, Hero 7 in Black version is actually black, not gray, just like its predecessor. Maybe it's only cosmetics, but in my opinion, the camera in black looks much better. 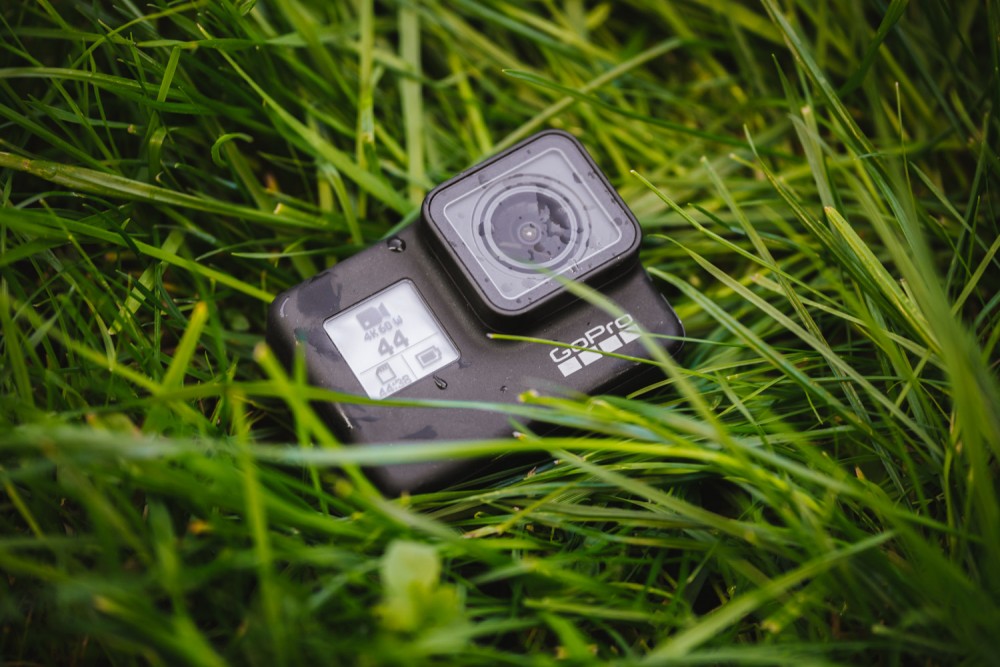 The camera records 4K images in 60 fps, in the 2.7K and 1440p modes you can record in 120 fps, and in Full HD we have as many as 240 fps. Such values ​​speak for themselves. No sports camera on the market offers more. In addition, we can change the proportions, from standard 16: 9 to 4: 3. The highest recording modes are implemented in the HEVC codec, which the camera honestly informs, because not all systems handle this codec.

We have three viewing angles. The basic one is Wide, available in all modes. After getting down with resolution and / or frame, we get the possibility to use SuperView mode with a much wider viewing angle (available up to 4K / 30p) or Linear mode, in which the camera corrects the fish eye (maximum for 2.7K / 60p mode) .

The quality of the video image is at a very high level. The movies are watched with great pleasure. The tonal range of the matrix is ​​large, the colors are very well saturated, and the contrasts add to the recordings of life. You can squeeze the most from the camera in Protune mode, which allows you to record the image in a flat color mode. It is in this mode that all the GoPro ads are created, after which you immediately want to buy a camera. All the time I can not believe that you can get such a good quality of materials from a tiny camera matrix.

GoPro saves photos in 12 megapixel resolution. We have at our disposal the RAW entry in the .gpr extension. There was also a Protune mode, i.e. a manual mode that allows you to define exposure parameters, sharpen or flat an image profile. We also have a new Superphoto mode, which is de facto HDR mode. Unfortunately, after enabling it, we lose the ability to save RAW images.

Photos straight from the camera do not make as much impression as films. They are fully useful, but it's a shame to waste the camera's potential on ordinary JPG files. I'd definitely recommend using RAW images, or at least using Protune.

The quality of the audio recorded in the camera was quite a problem with GoPro cameras. In the seventh installment of the camera is much better in this respect, although not perfectly. Audio can be used in emergency recordings, but ultimately it is better to buy an external microphone. You can check the sound quality by watching the end of the movie in the sixth point. 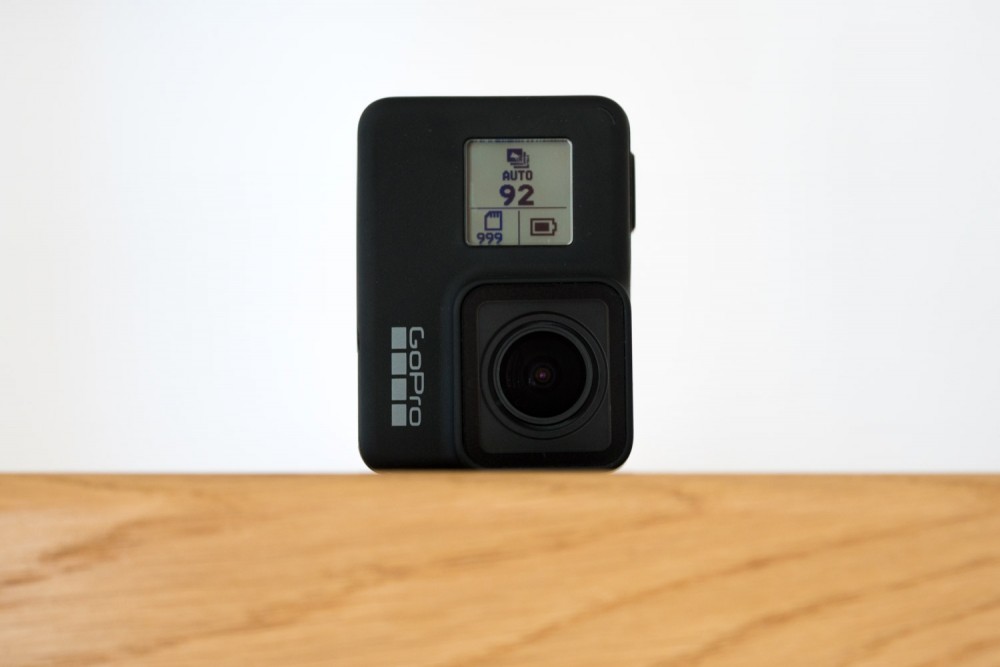 The GoPro Hero 7 automatically detects your position before recording and rotates the image and interface. We already know this function, but the novelty is that you can now also record in a vertical position.

Vertical video has been ridiculed for years, but ultimately works great in social media, which we mostly watch on smartphones equipped with vertical screens. The vertical works on Facebook or on Instagram Stories. Another nod to GoPro in the direction of community members is the possibility of streaming the live image straight from the camera, which in combination with the vertical video gives the creators new opportunities.

Not everything gold, what GoPro.

Unfortunately, the GoPro Hero 7 is not ideal. I found some quite significant flaws in it. 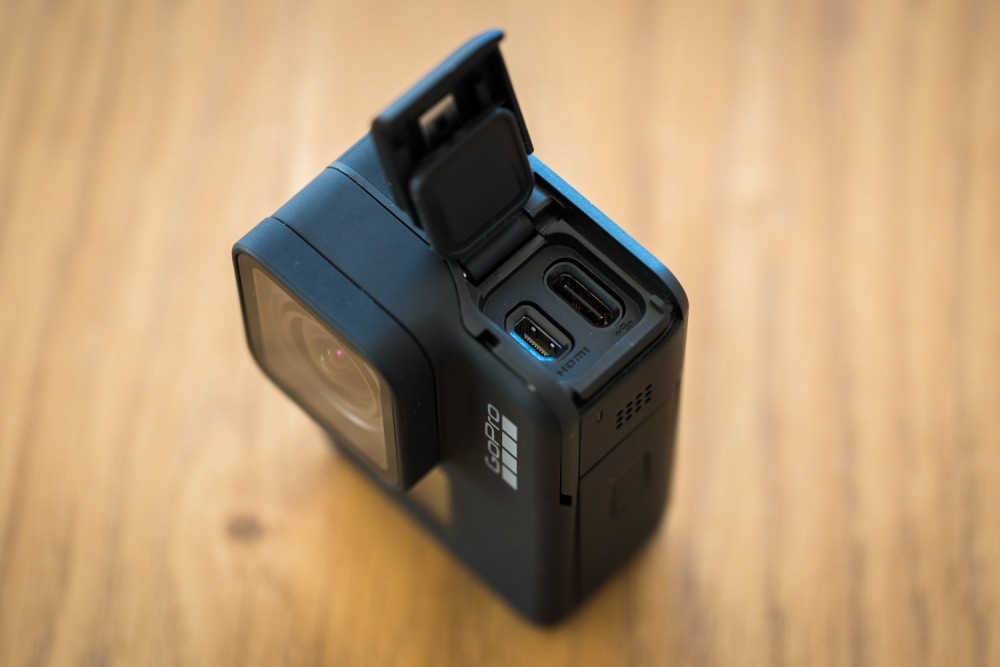 Minus number one: battery. GoPro Hero 7 allows you to record exactly one hour of 4K material at 60 fps using HyperSmooth. This is a typical result for this class of equipment, but from year to year I expect it will be better. If you want to extend the recording time, you can go down to Full HD resolution, in which the camera will record about 2 hours. and 15 minutes of material. The replacement battery is charged via the USB-C port.

Minus number two: connectivity with a smartphone. Despite really trying to pair GoPro with the application, I could not get a preview on the smartphone. This applies to both Android and iOS. The smartphone and GoPro see each other through Bluetooth, and they can even pair, but the app does not seem to notice it and is still waiting for the connection. It's a big minus. It remains to be hoped that the problem will be fixed in software updates. 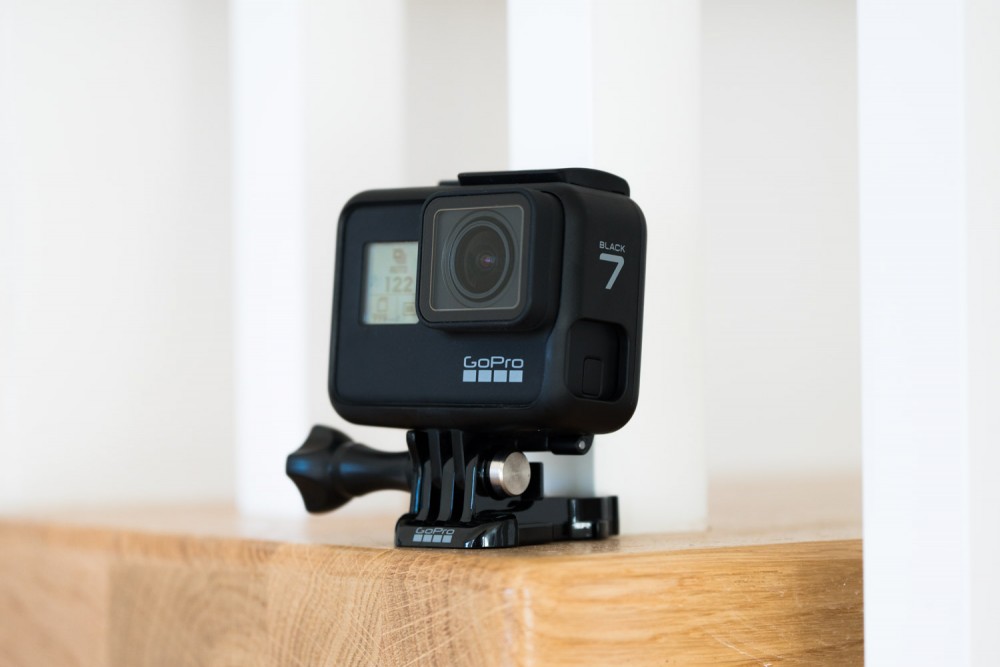 Minus number three: occasional problems with hanging the camera. During the tests, the camera could not be turned on or off from time to time. It looked like the process was hanging out. The screen was highlighted, but nothing appeared on it. The camera did not respond to the buttons, so the problem had to be solved by removing and inserting the battery. This situation never occurred during recording.

Minus number four: heating up. After an hour of continuous recording in 4K camera is not so much warm as hot. This is worrying, but you must honestly admit that GoPro has never shut down and reported temperature problems. So it looks like high temperatures are not a horrible camera, but still they are worrying that the electronics will be exploited faster.

In conclusion - Hero 7 Black is a very big step forward. 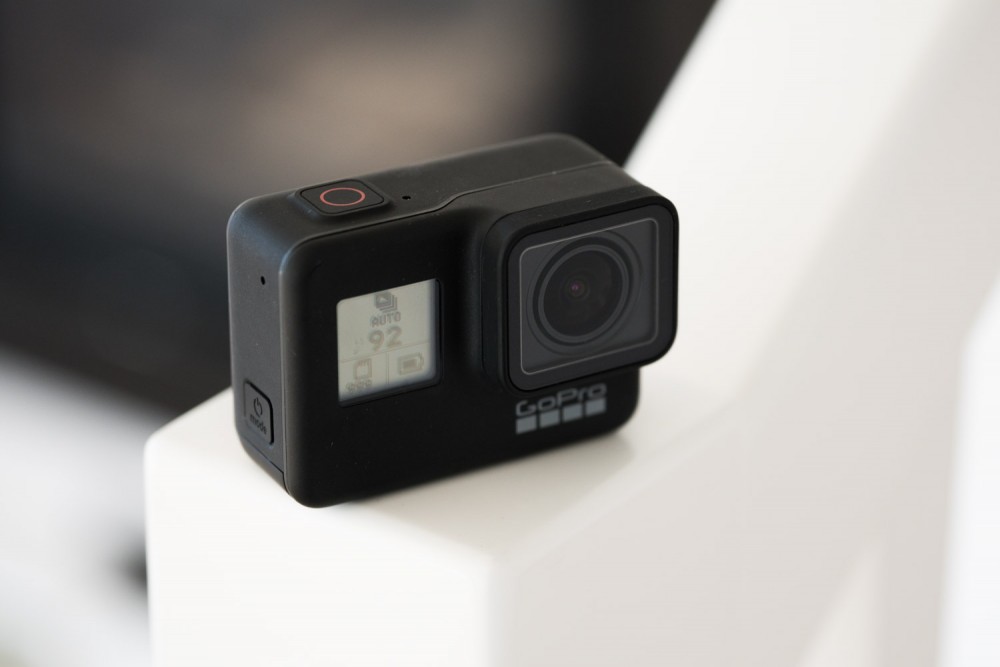 Looking at the specification, one can get the impression that the GoPro Hero 7 Black is not much different from the previous one, but the strength of the new camera is not in numbers (though they are great), but in new features such as the HyperSmooth and Timewarp. The first is a complete revolution that opens a new chapter in the history of sports cameras. I hope that such algorithms will become standard in some time not only in the action-cam segment, but also in large cameras. Timewarp, on the other hand, is a fun feature.

GoPro Hero 7 Black is also a series of smaller improvements, like a much better service system. It all makes for professional creators. Hero 7 Black is just a must-have , which is worth having in a bag with the equipment and used for unusual shots. On the other hand, enthusiasts will find more than they can use. This camera will serve for years. If you're wondering whether it's worth paying extra for GoPro Hero 7 versus version 6 or 5, the answer is simpler than ever: it's worth it.

The GoPro Hero 7 has so many functions, modes and settings that describing all would be enough not for one, but for at least five articles. If you are particularly interested in a particular mode, let me know in the comments and I will try to answer the questions.

Stabilization so good that you do not need a gimbal. GoPro Hero 7 Black - 7 of the best features
author xiaomist